Changing consumer buying patterns led by online sales are triggering big changes in the urban landscape. With shoppers heading less frequently to the sprawling malls that have sprung up around cities, the WSJ Logistics Report’s Erica E. Phillips writes, industrial pockets long considered the underbelly of cities are seeing renewed demand. For many cities, the movement marks a kind of “economic renaissance” after the decades-long decline of industrial zones, with distribution centers keyed to e-commerce customers central to the changing map. Unlike the familiar shopping center—with lighted signs, ample parking and public transportation—neighborhood-based e-commerce fulfillment centers are plain, designed to go unnoticed. Real-estate brokers are noticing the impact on land prices, however, and as e-commerce grows the sites may trigger more changes in infrastructure aimed at serving the delivery of goods rather than individual shopping trips.

Luxury retailers’s barricades against online sales competition are collapsing. High-end chains, which raised prices incessantly over the past decade, are learning that even wealthy customers are hunting for better deals and selection, the WSJ’s Suzanne Kapner and Ryan Dezember report, as internet-led transparency in pricing and supply batter their business. Sales of personal luxury goods fell 1% last year, the first decline since 2009, and market icon Neiman Marcus Group Ltd. has been bleeding sales at a far faster pace, leaving the chain saddled with debt. The company’s model, followed by other premium brands, of lifting profits by simply raising prices while controlling supply and distribution is out of fashion. That’s left more luxury retailers to look for ways to lower production and distribution costs, use data in a more sophisticated way and follow their customers in displaying a new kind of discipline in pricing.

The supply chain for one of the rarest of precious gems is being redrawn at a site in remote northern Mozambique. That’s where Gemfields PLC is sitting on the world’s largest known deposit of rubies, one of the few stones rarer and sometimes more expensive than diamonds. The WSJ’s Alexandra Wexler writes the company is reviving a playbook it used after taking control of the world’s largest emerald mine in Zambia in 2009, leveraging its control of supply to build new marketing and distribution channels that boost demand along with prices. The company is diving into ruby trade centered in Southeast Asia, where scarcity is embedded in the business and there are few economies of scale. Gemfields wants to change that, offering a steady supply of stones and better access to capital to expert cutters in Thailand. The company is betting that pushing goods more steadily to market will lead to greater demand—and stronger financial returns. 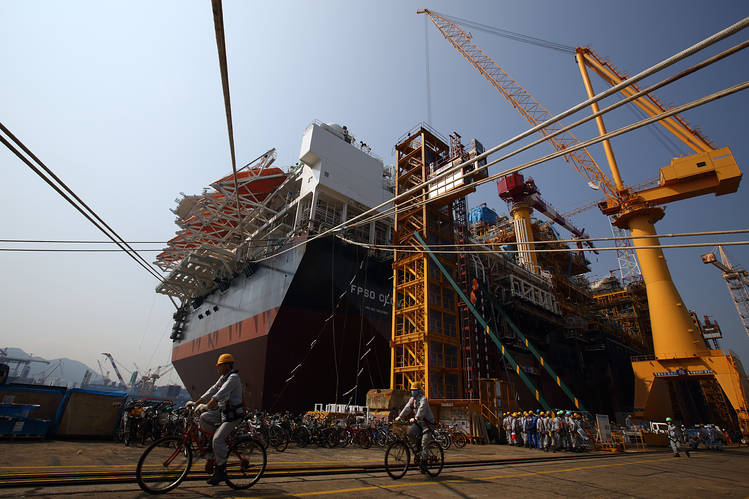 The world’s second biggest shipyard has a new lifeline but it still will have to fight to survive. South Korea’s National Pension Service agreed to a controversial bailout package for the debt-ridden Daewoo Shipbuilding & Marine Engineering Co., the WSJ’s Kwanwoo Jun reports, that will convert some $1.4 billion in bonds into equity. The NPS, which has a quarter of DSME’s debt, holds the key to its survival, as the yard is unable to pay hundreds of millions in bond maturities due this month. For DSME, the pact buys time but no assurance that its business is headed in the right direction after two years of massive losses. For that, the shipbuilder needs more high-margin ship orders to back its sprawling operations. With shipping capacity still plentiful across a range of services, it’s unclear how long DSME will have to hang on before orders recover.

The headline numbers at J.B. Hunt Transport Services Inc. were fairly strong in the first quarter, but the U.S. freight market looks more troubled deeper into the financial report. The company saw revenue rise 7% in the first three months and net income edged up 3% to $102.7 million, the Associated Press reports. Without a one-time after-tax benefit, however, the quarterly profit was down 11%, and operating profits in its big trucking, intermodal and brokerage business all took a hit in a market marked by sliding freight rates. Revenue in the trucking segment dipped to the lowest level in two years and the big intermodal segment was less efficient and more costly to run. J.B. Hunt operated fewer trucks last quarter, and the results show few signs that the carrier will want to add capacity anytime soon.

—Adie Tomer of the Brookings Institution’s Metropolitan Policy Program, on the growth of distribution centers for online sales.

Number of the Day

U.S. retail inventory-to-sales ratio in February, the highest level since November 2016, according to the Department of Commerce.

The growing use of digitally integrated factory machinery is pushing more manufacturers to buy insurance against cyber attacks. (WSJ)

Boeing Co. plans to lay off hundreds of engineers in Washington state and other locations amid slowing aircraft sales. (Industry Week)

Shippers and freight brokers expect only minimal tightening of capacity after electronic logging devices are required on trucks starting in December. (Journal of Commerce)

A California environmental advocacy group installed air quality sensors in neighborhoods near the Port of Oakland to get close readings of pollutants. (Los Angeles Daily News)